America's best podcast for learning how today's top business owners Think, Act, and Achieve. Onward Nation is a five-day-a-week podcast hosted by Stephen Woessner, CEO of Predictive ROI. Business owners share the most influential lessons learned throughout their careers, including insights into their daily habits, their most vital priorities that have contributed to their business and personal success, and the most challenging time or situation that could have devastated or even ruined their businesses or careers. Business owners share their "recipes for success" including those systems they wish they had put into practice inside their business when first starting out. Each episode concludes with guests sharing two or three practical and tactical strategies they would recommend to brand new business owners in order to best ensure success in their new business and careers. Onward Nation provides business owners with the strategies and tactical step-by-step "recipe" that will help anyone make their business more systematic, predictable, measurable, and repeatable.
Facebook Twitter RSS Feed Subscribe in Apple Podcasts
Onward Nation
2021
September
August
July
June
May
April
March
February
January

Niche down your business to create opportunity

What You Will Learn:

Niche Down Your Business to Create Opportunity

As we’ve discussed many times before on Onward Nation, taking steps to niche down your business and focus on a specific audience — rather than limiting your opportunities as you might expect — opens new doors by helping you plant your flag of authority and becoming a trusted expert within your niche. It allows you to differentiate your business and to compete on value rather than joining the race to the bottom on price. And in this week’s episode of Onward Nation, you’ll hear a perfect example of how tight focus and a dedication to serving a niche can become powerful fuel for your business.

Parker Stevenson is co-owner and Chief Business Officer at Evolved Finance, a bookkeeping firm specializing in helping online coaches, course creators, influencers, and thought leaders to make better business decisions based on solid financial data. This decision to narrowly focus on thought leaders didn’t come lightly, but doing so has made a profound impact on the business and its growth.

Niche down and plant your flag

The decision to focus on thought leaders, content creators and online influencers wasn’t made hastily — and Parker says the team was initially apprehensive. What if narrowing their focus meant losing business? Were they making the wrong decision? Despite their worries, the data backed up their conclusion. According to this article from Forbes, e-learning is set to become a $325 billion industry by 2025 — that’s nearly a billion dollars per day.

Working with clients within such a fast-growing segment made sense on paper, so the team decided to go for it — and the decision to focus and niche down paid off. According to Parker, Evolved has had their most successful year and most new clients ever in 2020… even in the midst of the global pandemic. By narrowly focusing on their target audience, the team at Evolved Finance were able to establish their authority and prove their expertise working with that particular type of client. And the result is that Evolved will reconcile over $100 million in client revenue in the thought leadership space by the end of 2020. Not only that, but Parker says it has allowed Evolved to “do less and charge more” by truly specializing in doing a few things better than anyone else.

Even their clients who niche down are seeing the benefits

Parker explained that even Evolved’s clients are discovering the value of niching down. Parker shared a case study of a client who was doing decent enough business but was struggling to juggle 15 different revenue streams at once. This lack of focus was eating away at her company’s resources… and her time. After encouragement from Parker’s team, she shifted to offering only one awesome product and selling it well, rather than spreading her efforts across many different products and services. That streamlining helped her turn a moderately successful but unfocused business into a rapidly growing and highly profitable multi-million dollar organization — proving that it’s better to niche down and master just a few things than to be a jack of all trades. 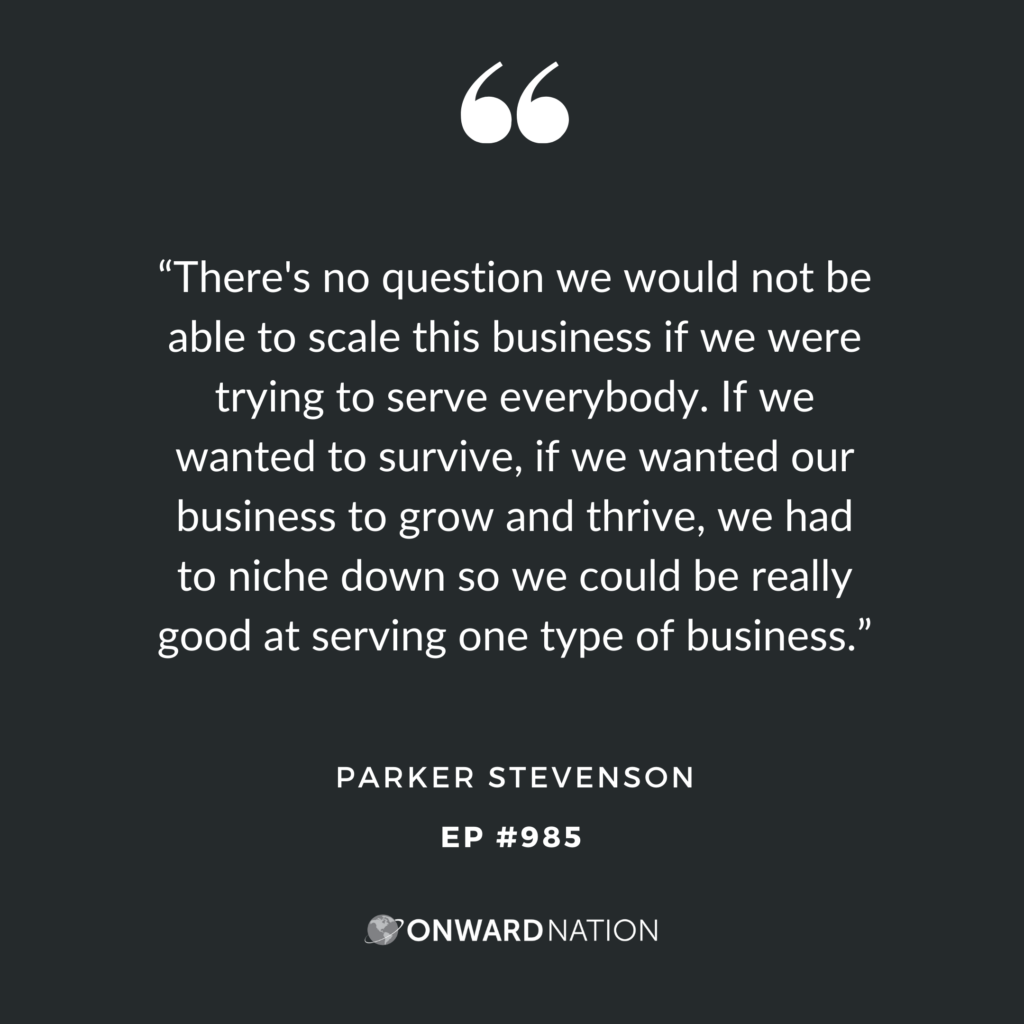 Parker Stevenson is a co-owner and the Chief Business Officer at Evolved Finance; a bookkeeping agency that specializes in helping online entrepreneurs to build more profitable and financially stable online businesses. For over 6 years, Parker has been advising some of the top coaches, course creators, influencers, and thought leaders on how to make more sound business decisions using their financial data. Before joining Evolved Finance, Parker spent five years at Adidas America where he became the US product manager for golf footwear.

How to Connect with Parker Stevenson:

0 Comments
Adding comments is not available at this time.
©Copyright Onward Nation, LLC.