America's best podcast for learning how today's top business owners Think, Act, and Achieve. Onward Nation is a five-day-a-week podcast hosted by Stephen Woessner, CEO of Predictive ROI. Business owners share the most influential lessons learned throughout their careers, including insights into their daily habits, their most vital priorities that have contributed to their business and personal success, and the most challenging time or situation that could have devastated or even ruined their businesses or careers. Business owners share their "recipes for success" including those systems they wish they had put into practice inside their business when first starting out. Each episode concludes with guests sharing two or three practical and tactical strategies they would recommend to brand new business owners in order to best ensure success in their new business and careers. Onward Nation provides business owners with the strategies and tactical step-by-step "recipe" that will help anyone make their business more systematic, predictable, measurable, and repeatable.
Facebook Twitter RSS Feed Subscribe in Apple Podcasts
Onward Nation
2021
October
September
August
July
June
May
April
March
February
January

The Keys to Scaling a Business the Right Way

What You Will Learn:

The Keys to Scaling a Business the Right Way

William S. Burroughs famously said, “When you stop growing, you start dying.” We all want our businesses to keep growing, but sometimes we hit obstacles and roadblocks during the scaling process — and the solutions we used to get us where we are often don’t work to get us where we want to be. In this episode of Onward Nation, FreshBooks CEO and co-founder Mike McDerment shares how his business, which started out with six team members in his parents’ basement, has grown to millions of users in over 160 different countries. And — he shares key lessons on scaling a business he learned during that remarkable growth journey — lessons that can help you fuel the growth of your own business.

Mike created the software that would become FreshBooks after growing frustrated when he accidentally saved over a past billing invoice. That’s when he decided to create a better tool for small business accounting. The tool proved successful — and Mike’s focus shifted to this new business opportunity. One of the important decisions Mike made early in the life of FreshBooks was to walk away from venture capital funding. At the time, Mike was concerned that the need to offer a return on investment could stunt progress in scaling a business — and so for years, FreshBooks was self-funded. Ultimately, this put the company into a great position now that it is in the pre-IPO stage because it allowed FreshBooks to remain more nimble without being beholden to outside investors during its critical growth period. While Mike believes venture capital isn’t always a bad idea, it wasn’t the right choice for FreshBooks.

During FreshBooks’ remarkable period of growth, the company reached several key milestones and breakpoints. Each time, Mike and the team had to adapt to change and learn new, critical skills directly tied to scaling a business. For example, early on everyone reported directly to Mike — but eventually, the team grew enough that managers needed to be added. As Mike said during his interview, it was important to identify when these breakpoints happened and to adapt the business to continue scaling through them. And it is an ongoing process — as the business grows, the things needed to keep it moving change. Ensuring that everyone is aligned with your mission and values is critical, and if a team member isn’t in alignment with their role, it is important to address the situation honestly and clearly. As Mike said, every business problem is a people problem at its heart. Getting the right people in the right seats can help you overcome any obstacle. 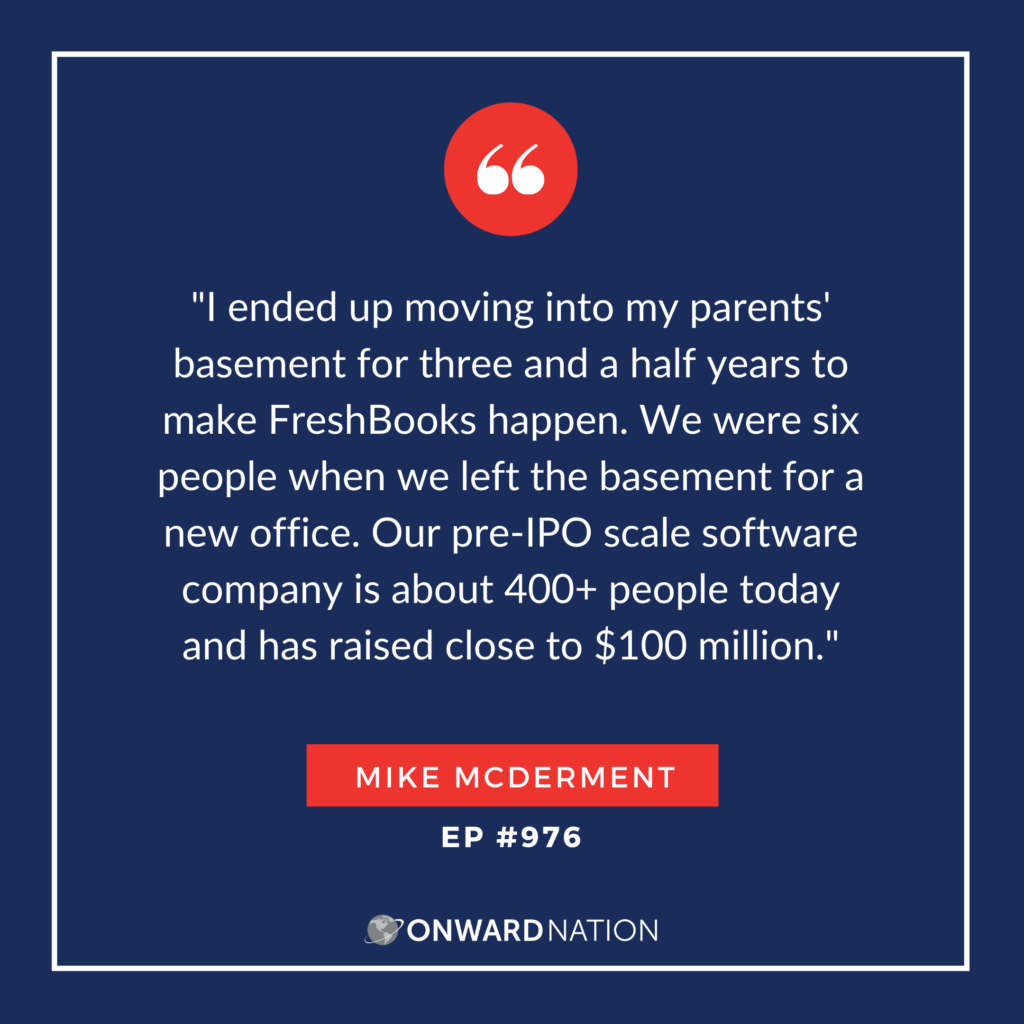 Mike McDerment is the co-founder and CEO of FreshBooks, the world’s #1 cloud accounting software for self-employed professionals. Built in 2003 after he accidentally saved over an invoice, Mike spent 3.5 years growing FreshBooks from his parents’ basement. Since then, over 10 million people have used FreshBooks to save time billing and collecting billions of dollars. A lover of the outdoors, Mike has been bitten so many times it’s rumored he’s the first human to have developed immunity to mosquitoes.

How to Connect with Mike McDerment:

0 Comments
Adding comments is not available at this time.
©Copyright Onward Nation, LLC.